“They should have dumped you In trash” – Cee-c attacks troll

Reality star, Cynthia Nwadiora popularly known as Cee C was dragged into an online fight with a follower who said Tobi dumped her for Kim OPrah.

It all started when the reality star took to her twitter page to share some advice to her fans with a caption saying;

“A leopard/leopardess never changes its spots… he /she just changes what tree he/she sleeps in or who he/she sleeps with..”, she wrote.

Following Cee-c’s tweet, an online bully took to the comment section to remind her that Tobi had dumped her for the second time and he is now dating Kim Oprah.

“I am bored so let me watch you dumbos dance under my tweet. Eyaaaa Tobi has dumped you the second time again for Komoprah? No vex Peruzzi will take care of U #strollsofftogoeatfreshfish.”, the troll wrote.

“They should have dumped you in trash, to spare us all from your stupidity.”

See their exchange below; 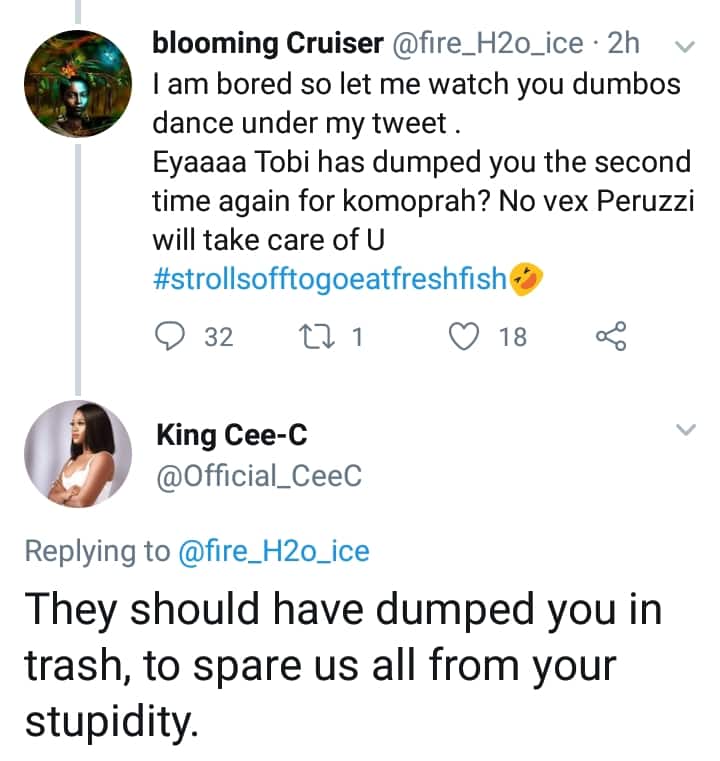 loading...
Previous ‘I was a mom at 15, a dropout at 16, widow at 52, raped at 65’ – Actress Ajai-Lycett
Next US star Travis Greene confirms Ghana has the best women, jollof rice