Protesters stormed United Nations base in DR Congo Monday evening after eight people were killed on Sunday night in an attack by armed fighters in the northeastern city of Beni.

The protesters marched on to the UN base, citing the United Nations’ ‘inability to act’ to prevent the Sunday night attacks, and kept on advancing despite several gunshots fired into the air by Congolese military forces. 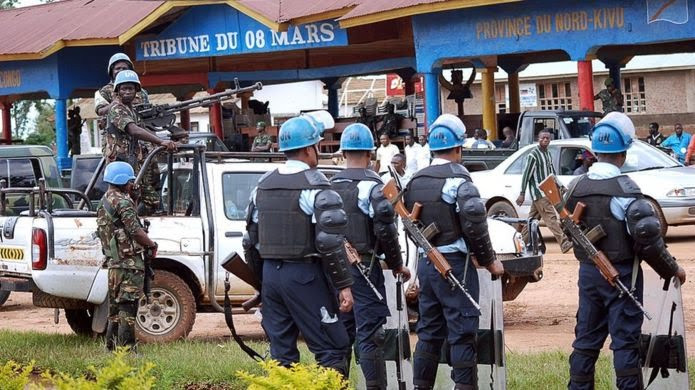 According to police, the protesters also burnt the office of the Mayor with a social media post showing flames shooting from the window and thick black smoke billowing above.

“Several offices at the MONUSCO headquarters were set on fire and looted,” Teddy Kataliko, a civil society leader in Beni said to Al Jazeera News.

“Residents are demanding the withdrawal of MONUSCO from Beni because of the inaction of UN forces.”

“The UN soldiers were trying to defend themselves but it was very difficult. Two people were killed around the demonstration around the UN camp, which destroyed half of the wall of the main UN building,” Alain Uaykani, reporting from Beni told Al Jazeera.

“The same protesters are now heading to the second military base of the UN located at the airport. This is a very, very difficult situation going on here in the town of Beni.”

Reacting to the attacks, Matthias Gillman, a UN spokesman said;

”We do understand the anger and frustration of the population but ask for understanding that attacking UN or local facilities … actually weakens the Congolese army’s operations against the ADF,”

‘The dense jungle terrain makes it difficult to protect every remote village, especially when the ADF tend to attack silently at night’

“We can’t put a peacekeeper behind every Congolese,” Gillman said.