Meet the Lady CEO behind the Saint Ozwald Shoes

From her humble beginning in Sunyani in the Brong Ahafo region, a senior high female graduate from the Twene Amanfo Senior high in the Brong Ahafo Sunyani and a Ghanaian now boasts of being one of the most popular Made-in-Ghana shoe brands and has the most number of celebrity endorsements.

After Sandrah Ozwald completed school in 2013, her parent couldn’t have enough money to help her continue school so she planned to do something for herself by selling ice cream, groundnut cakes or food. Back at the senior high, Sandra used to make groundnut cakes, condensed toffees and ice cream to support herself since her mother couldn’t provide all for her.

With 12 siblings and the only girl child (2nd born) among them, and whiles planning which of these to sell, Sandra attended a friend’s wedding and the grooms shoe looked so attractive to her.

According to her, the groom’s shoes were Made-in-Ghana with an African print. “So I got attracted to the shoes. I called the bride who is a friend to know about her husband’s shoe. My friend showed me the shoes and who did it for them,” she explained.

Sandra was shocked because she never knew such shoes could be made in Ghana. “I took the shoemakers number, called him and gave him some small amount of money I have saved to make some few ones for me to sell. 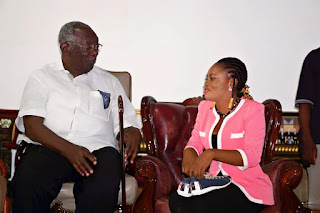 Sandra and President J. A. Kufour

“The shoemaker agreed and we got into business but after he made them for me to sell, I nearly stopped selling the shoes because my first day at work was terrible. I was sacked from the first office I entered. They told me they don’t sell there. But God being so good I encouraged myself since I knew I could not wear those men shoes,” she mentioned.

She went on to sell and got many customers and became more interested in the business. “My mother fought me several times because she wasn’t interested in that when I told her I want to learn how to make shoes.”

But later her mother couldn’t do anything than to allow her to achieve her dream. “I then spoke to the shoemaker my interest and what I want to do. He agreed to assist me learn and later I got to how to make the shoes myself. We initially work together for a while until he left.”

Read Also:  How to have good sex during a woman's period

“As a young lady and looking how my mother used to beg for money and food before we could eat, I got inspired to do more to make my mother happy. All these moved me to work hard so I make my mother proud even though I couldn’t continue school to make her proud. “ 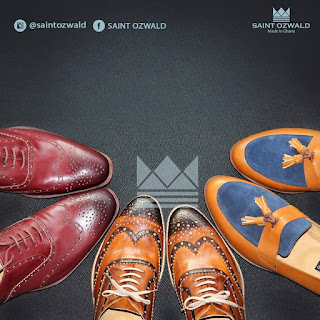 Sample of her shoes

I then registered my brand- Saint Ozwald to start producing my shoes. I started this five years ago and I’m working very hard to build a brand that will compete with the international Brand…especially the Zara Brand.

The founder and Chief Executive Officer (CEO0 of Saint Ozwald wants to build a brand from Ghana that would be respected worldwide.

With amount GHc300, Sandra has been able to employ 15 permanent young shoemakers and currently training people and there are others who have improved their skills in making shoes as well.

Saint Ozwald has endorsement from most of the Ghanaian celebrities include Kwasi Kyei Daakwa (KKD), Nathaniel Attoh, Adjetey Annang, Abeiku Santana, Prince David Osei, Stephen Appiah, Fiifi Coleman and many of them.

Sandra has made shoes for the former President John Agyekum Kufour and Dr. Thomas Mensah, the Ghanaian American inventor.

Working from a family garage in Sunyani in the Brong Ahafo, Sandra wants to expand the small factory and she needs help.

“Now my only problem is I need Ghanaians to support me with machines and finance to train more young ladies and young men into shoemaking so we build the shoe manufacturing sector in Ghana,” she made appeal. 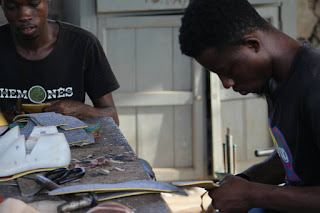 Some of her workers at work

The price of the shoes ranges from GHc250 to GHc500. “I produce for everyone who can afford because the shoes come with quality branding and the finishing is so great especially for Ghanaians who like Made-in-Ghana.”

Saint Ozwald produces 150 pair of shoes every month with the raw materials coming from Italy.

Alexia Smith, the ex-girlfriend of rapper late Juice Wrld, has come out to speak about …