A distraught Nigerian man in a bid to keep friends updated with happenings in his relationship announced that he dumped his girlfriend of 5 years after discovering she has a secret son.

Fumlack Kingsley George also accused his girlfriend of cheating while they were dating, and further stated that he had no choice but to break up with her. Sharing a photo of the man his girlfriend of five years was cheating on him with, he wrote;

Pls for those who care and have been calling to know what’s happening with us lately, I present to you my official evidences and left with no choice but to do what I did! #LettingGoForGood.

Keeping a secret of having a son outside wed_luck for five years of us being in a relationship is thing I can never condone.

Read Also:  Woman who paid £10 for a psychic reading on Facebook demands a refund after being told she loves TANNING and teeth whitening - in a hilarious exchange posted online 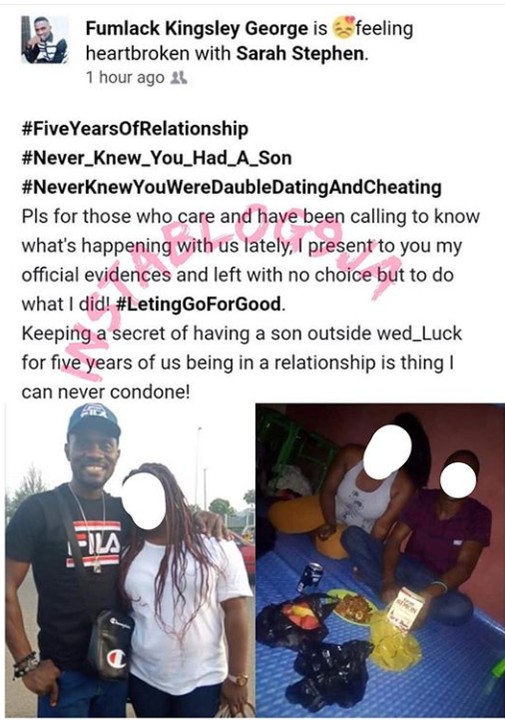 loading...
Previous Mzbel is a hypocrite; she slept with my fiance- Afia Schwarzenegger
Next GuiltyBeatz shoots up charges 200% after working with Beyoncé

Alexia Smith, the ex-girlfriend of rapper late Juice Wrld, has come out to speak about …