Members of the Indigenous People of Biafra (IPOB), have told those that cared to listen, that they have a standing order to attack the governors of Ebonyi, Anambra, Abia and Enugu as well as other prominent indigenes of the South East attending functions abroad.

This was made known after the former Deputy Senate President Ike Ekweremadu was attacked at the Second Annual Cultural Festival and Convention organised by Ndi-Igbo in Nurnberg, Germany, yesterday Saturday August 17th. 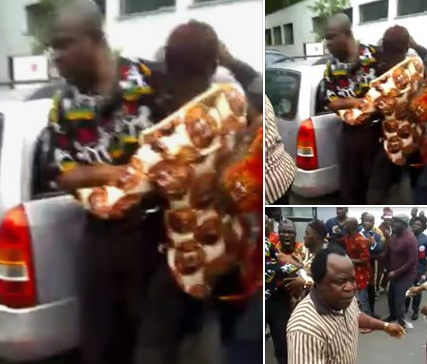 IPOB spokesperson, Emma Powerful, in a chat with Punch, said the state governors have been marked for attacks if they dare come abroad for any function. According to Powerful, the South East governors are traitors who have sold the lives of their people to their oppressors.

Making particular reference to the Operation Python Dance set up by the Military to curb the activities of Biafrans in the South East, Powerful said the South East governors over the years have watched as the military maimed their members without any just course.

He added that the governors watched as the Federal government proscribed and tagged IPOB a terrorist group but have remained silent as Fulani herdsmen continue to carry out series of attacks in the South East.

He said, “Today (Saturday), the Nuremberg IPOB family in Germany, in keeping with the long-standing directive from our leader to hound all instigators of the Operation Python Dance, is glad to report that Ike Ekweremadu was confronted and duly hounded out of a so-called New Yam Festival event in Germany.

“Despite repeated warnings to the organisers of this jamboree that Enugu, Ebonyi and other parts of ‘Biafraland’ is under siege by the Fulani caliphate and their collaborators within, they went ahead to invite a known traitor, co-conspirator and one of those who worked with Igbo governors to proscribe and tag IPOB a terror organisation while they never raised any voice against the murderous Fulani herdsmen.

“This should serve as a warning to Nnia Nwodo, Dave Umahi, Okezie Ikpeazu, Willie Obiano and others that any day we find them in a public event abroad, they will be humiliated. IPOB is strategically located in over 100 countries around the world. Anywhere we find them, they will be dealt with.” Powerful concluded.