‘I declare into your life! Where you ought to be highly placed,you will not be replaced there. Your seat of glory will not be empty. You will sit gloriously to eat the fruit of your labour. Your land will not fail to bear fruits in its season’, Davido Tweeted.

In reaction, controversial OAP, Daddy Freeze said the singer’s prayer is more viable that of Pastor Enoch Adeboye, General Overseer, Redeemed Christian Church of God, RCCG, which was also shared on social media and centered on suspension of protocols, rules and criteria in order to be promoted.

Read Also:  COZA/Davido ; Lady in the controversial promotion video for the church tenders her apology

“Father, let all protocols, rules and criteria be suspended, overlooked and overruled, as you did to Joseph, in order for me to be promoted, in Jesus name.” pastor Adeboye’s prayer read

Taking to Instagram to compare both prayers, Freeze wrote; 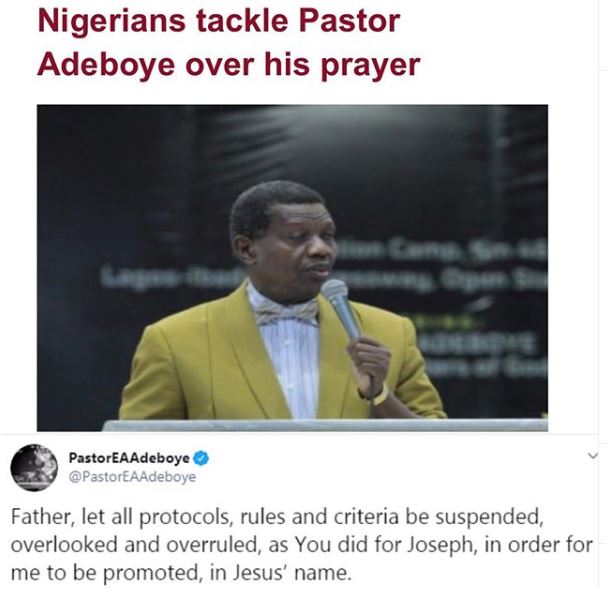 Dear pastor Adeboye, the leader of the FreeNation in Christ online church greets you and brings glad tidings. Prayers like yours are what put Nigeria in the quagmire that we are currently in.

Unqualified people who are ‘favored’ are in positions of leadership in churches, mosques and in the political and economic sectors; the result is 94 million people in extreme poverty, more than double the combined number of people in China and India in poverty.

We need to disabuse our minds and realize that in Christianity David and Goliath have EXACTLY the same grace and the only ‘unmerited favor’ a Christian receives, is the death of Christ on the cross to pay our debt once and for all time. he wrote