Fans of Chelsea have this afternoon flocked to Twitter to slam Willian, after the Brazilian covered up Blues’ boss Antonio Conte in an Instagram post following the club’s FA Cup final victory over Manchester United.

The Blues and Red Devils went head to head at Wembley yesterday, in the final fixture of the English football calendar this season.

Both clubs headed into proceedings desperate to clinch their first silverware of the campaign, after Manchester City claimed the Carabao Cup back in February, before sauntering to the Premier League title last month.

Ahead of kick-off yesterday evening, one of the main talking points amongst Chelsea’s fans was Antonio Conte’s team selection, with the Italian tactician having switched to a 3-man midfield in a bid to nullify United’s midfield trio of Nemanja Matic, Paul Pogba and Ander Herrera.

As such, one attacker obviously had to drop out of the Blues’ starting line-up, with Willian the man left out in favour of Eden Hazard and Olivier Giroud.

In the end, Conte’s choice of XI could hardly be argued with, as his side ran out comfortable 1-0 winners, courtesy of a 22nd-minute penalty from Eden Hazard.

However, despite his side’s win, Willian was clearly not happy with the decision of his manager to leave him out at Wembley, with the Brazilian winger having since taken to Instagram to aim a less-than-subtle dig at Conte:

In addition, Willian refused to take part in any interviews in the aftermath of Chelsea’s triumph last night, with further reports claiming that the Manchester United-linked wide-man simply informed reporters that he doesn’t know whether he will still be plying his trade at Stamford Bridge next season.

In the hours since Willian’s post went public on Instagram, large sections of Chelsea’s fans have jumped to the defence of Antonio Conte, slamming Willian as disrespectful and calling for the 29-year-old to be sold:

Never liked or rated Willian anyway. Now he should be sold & if it doesn’t involve Martial thenid sell him abroad.

Willian can fuck right off now. If It were down to me I would sell him abroad. Whatever his relationship with the manager – he should not be washing our dirty linen in public. 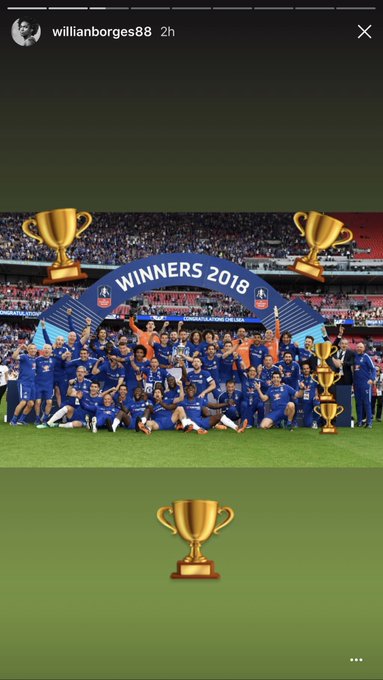 Disgusting attitude by him. Willian’s been in and out the team before Conte arrived! Willian is overrated. Sell Willian! Get him out.

Well, that’s not subtle. There’s been friction since last summer between him and Conte, hence United interest. https://twitter.com/liam_twomey/status/998171717418868736 …

This is not good. Keep Conte, sell Willian, if that’s his attitude.

Who gassed Willian , sell him ASAP , he performs only for 2 months in a season

You know the words!

Willian just lost a portion of Chelsea fans with 3 simple emojis, what purpose did scrapping Conte out of the photo serve? With that attitude I won’t even blink if he goes off to Man Utd this summer

Hopefully Willian never pulls on a chelsea shirt again. Goes to United and is benched every game while conte takes us to premier league glory. Fucking shit idiot