Nigerian RnB sensation, Olubankole Wellington, popularly known as Banky W, who went into politics in 2018 has now hinted at a likely comeback in 2020 saying he plans to do at least one album in the coming year.T

his announcement was made this morning, via his Twitter account, as he responded to a tweet from a fan who talked about how much he misses Banky W the singer and clamored for some more music.

Banky W tweeted back at the fan, disclosing his plans for an album and appreciating the massive love he still has from his fans across the country. 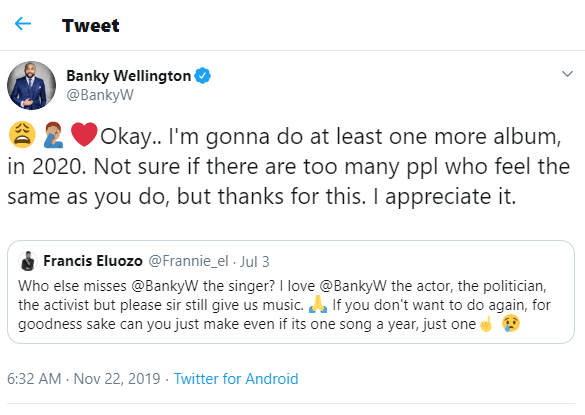 loading...
Previous “Ex convict you need therapy” – Tacha slams Kemi Olunloyo
Next Calling me ‘ashawo’ is archaic, it won’t shut me up – Nana Aba to critics